Jumping Up and Down Is Ridiculously Good Exercise 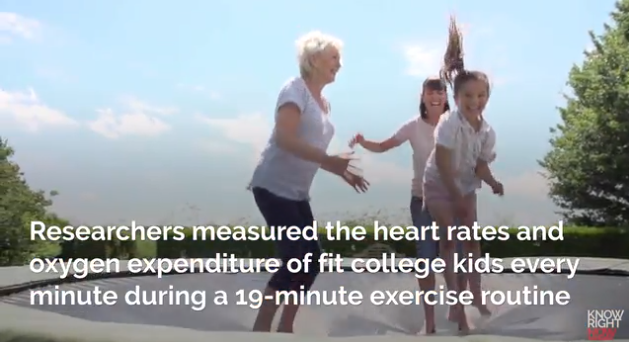 A new study by the American Council on Exercise (ACE) finds that bouncing on a mini trampoline for less than 20 minutes is just as good for you as running, but feels better and is a lot more more fun. The researchers gave a group of 24 fit college kids a mini trampoline and popped in a 19-minute trampoline exercise video. They measured the jumpers’ heart rates and oxygen expenditure every minute. Trampolining was found to be moderate-to-vigorous intensity exercise: with about the same physical effects as running six miles per hour, biking, or playing football, basketball or ultimate Frisbee. Yet when people were asked to rate how exerted they felt, they gave scores more consistent with light-to-moderate intensity—suggesting that the workout felt easier than it should have.

That’s one of the upsides to bouncing on a trampoline, besides conditioning your calf and leg muscles. “One downside of running is that it can lead to orthopedic injuries,” says study author John Porcari, professor of exercise and sport science at the University of Wisconsin La Crosse. But even though the motions are similar in jumping, the trampoline absorbs some of that shock, causing the impact forces on the feet and lower extremities to ease up, he says. “It absorbs the shock instead of you pounding on the pavement, and that makes it seem easier than it is.” It’s also, obviously, a lot of fun—no small factor when it comes to getting people to exercise, which Americans are notoriously loath to do. “When you’re following along to a video or doing something fun, the enjoyment factor overrides the fact that you’re working hard,” Porcari says. “You just focus on having fun.”